FixMKVGaps can be started in command line mode, using “switches” listed in the help panel, opened by typing F1. 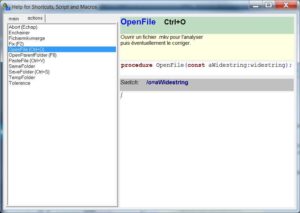 For example to open a file, use the OpenFile action whose switch is o and the syntax of the form /o=aWidestring.

So to run fixmkvgaps by opening and analyzing the file g:\gaps \Rear window.mkv, we will use the command

This expression assumes that the file fixmkvgaps_xxxx.exe is in the current folder. Otherwise, one must of course add its path.

All parameters of type widestring (or string) must be enclosed in quotation marks.

Some actions have no parameters, for example PasteFile that pastes a file in FixMKVGaps that was copied to the clipboard. Its switch is v and it will be used with the syntax /v. So the command line fixmkvgaps_xxxx.exe /v launches the application with the file that was copied to the clipboard, if there was one. Similarly Fix, that repairs a file that has been analyzed has switch x and will use the  syntax /x. Several actions can be combined in the same command line. For example, if you want to open a video and fix it after analysis, you will write: fixmkvgaps_xxxx.exe /o="g:\gaps\Rear Window.mkv" /x

Finally some actions toggle between True and False, for example Options that displays or hides the settings page and whose switch is r. Such an action has several possible forms: if we write +r then we display the page; if we write -r then we hide the page; and if we write /r then we reverse the current situation: we close if it was open and open if it was closed.

To finish a more complex example of a command line:

This command requests to save each repaired file in the same folder as the original file, to chain a repair when a file has been opened and analyzed and not to save the Settings when closing the application. Then it opens two video files (which each time causes the analysis and the repair ) and finally quits the application when it’s done.

Was this article helpful to you? Yes No